Called “Paha Sapa” the Black Hills are home to many tribes, consisting primarily of the Lakota and Dakota nations. However, nearly two dozen other Native American Tribes claim the Black Hills as ancestral and sacred.The word “Dakota” is a Native American word meaning “friendly” or “allied.” As a result, the area is especially rich in culture. Some of the more popular activities staged by tribes are powwows, or “wacipi,” which are usually open to visitors. The Black Hills Powwow, or “He Sapa Wacipi,” is held in Rapid City and is open to all tribes and non-Native Americans. Learning the culture and history of local Native Americans gives visitors a complete picture of the region and adds depth to any vacation. 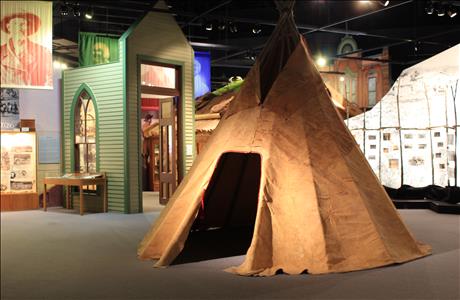 Mato Paha or “Bear Mountain” is the Lakota name given to the unique formation at Bear Butte State Park, located just along the northern edge of the Black Hills. Bear Butte is a stand-alone mountain rising 1,400 feet above the prairie, and from its peak you can view four neighboring states.

This area is one of many considered sacred by Native Americans and is the site of many ceremonies and gatherings. Many Native Americans see the mountain as a place where the creator has chosen to communicate with them through visions and prayer. Notable leaders including Red Cloud, Crazy Horse and Sitting Bull visited Bear Butte.

Because of its natural and historical heritage, Bear Butte State Park has been designated as a National Natural Landmark and a National Recreation Trail. Two hiking trails, a lakeside use area with 15 basic campsites and a small, roaming bison herd make the area a visual wonder for travelers. In respect to religious activities, the park is managed for daytime use only. An entrance fee is required. 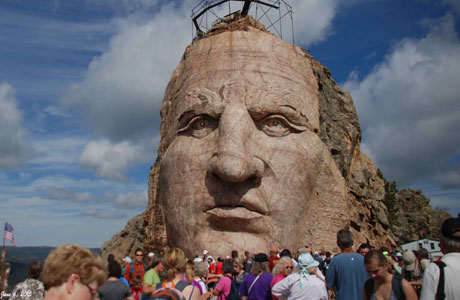 The project was started in 1948 by sculptor Korczack Ziolkowski and Lakota Chief Henry Standing Bear to honor the heritage, tradition and culture of North American Indians. Its namesake, Crazy Horse, was a war leader of the Oglala Lakota Tribe and a prominent leader in the Sioux resistance to white encroachment the Black Hills. His bravery and skill are admired and the Sioux revere him as one of their greatest leaders.

The complex surrounding the mountain carving includes the Indian Museum of North American, the Native American Cultural Center, the Sculptor’s Studio and a 40,000 square foot Orientation Center and theater. Nightly performances of a multimedia laser-light show spotlight Native American culture using dramatic animations and a stirring musical score. The Crazy Horse Stampede rodeo is held mid-June on the grounds and is sanctioned by both the PRCA and Great Plains Indian Rodeo Association. Also in June, the Crazy Horse Volksmarch opens to hikers a 10K route that winds around the base of the mountain and up onto Crazy Horse’s outstretched arm.

Want a live look at the Mountain? Click here for their web cam that updates every 90 minutes.

An entrance fee is required to enter Crazy Horse, which is open year-round, and good for one day of admission. Proceeds fund further development of the memorial.

Pay tribute to hundreds of fallen Native Americans at Wounded Knee Cemetery on the Pine Ridge Indian Reservation. This solemn and tragic site honors the lives of 300 Lakota men, women and children. You can also learn more about the events of December 1890 by touring the Wounded Knee Museum in Wall, South Dakota.

Authentic arts and craft traditions are still practiced by many Native Americans in the Black Hills. Artists still use the original materials and techniques of their ancestors to create one-of-a-kind crafts and Plains Indian art. From carefully fashioned beadwork and jewelry to furniture and clothing, these timeless works are available around the Black Hills region, giving visitors a treasured cultural keepsake.

Located on the Pine Ridge Indian Reservation, the Heritage Center has been a part of the Red Cloud Indian School since 1982. The center features an outstanding collection of Native American fine arts and Lakota tribal art dating from the 1870s to today. Including over 2,000 paintings, drawings and sculptures, the center’s collection represents a wide range of Native American cultures and traditions, enriching your visit to the Black Hills and increasing your understanding of the land’s native people.

Tatanka: Story of the Bison

The North American bison, once numbering in the millions, dwindled to less than 1,000 by the end of the 1800s. Kevin Costner’s Tatanka, near Deadwood, pays tribute to this amazing creature and its cultural significance with a larger-than-life bronze sculpture featuring 14 bison pursued by three Native American horseback riders. The complex also includes a hands-on interpretive center, Native American gift shop and snack bar.

The Journey Museum, in Rapid City, South Dakota, brings together four major prehistoric and historic collections to tell the story of the Western Great Plains. From the dinosaurs that roamed the area, to the Native Americans and homesteaders who shaped the Black Hills, the museum offers great insights into the legacy of the land and its people.

One of the first tribally-controlled colleges in the United States, Oglala Lakota College on the Pine Ridge Indian Reservation creates opportunities for residents to further their educations. Visitors can shop the Oglala Lakota College Bookstore, which offers clothing, prints and other gifts.