Learn to be a Jr. Paleontologist

An active paleontological dig site with a current mammoth count of 61 (58 Colombian and 3 woolly mammoths). It’s the largest concentration of mammoth remains in the world. It’s the Mammoth Site, located in the Black Hills of South Dakota.

Most fossils found are from the North American Columbian mammoth, plus three woolly mammoths have also been discovered here, making this “east meets west mammoth gathering” the first time both species have been found together. Fossils of other Ice Age animals have also been discovered: camel, llama, giant short-faced bear, wolf, coyote and prairie dog to name a few. Imprint fossils of bird feathers, complete fish skeletons, and thousands of mollusk shells have also been recovered from this now-dry 140,000-year-old sinkhole.For years it has been reported that the sinkhole was 26,000 years old; however, in 2018 new technology and mythology confirmed the new age.

The bones, scat and shells are identified, numbered cataloged and preserved, with almost all the mammoth remains displayed in-situ (as they were found in the sinkhole). 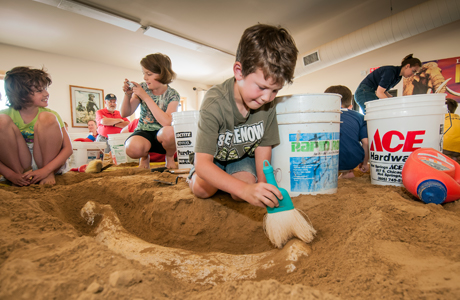 An advanced Paleontology program for kids over 10 teaches proper excavation techniques and bone identification within a mock bone bed environment with replicas made from discoveries within the actual bone bed. Participants will also learn how to map and jacket a bone.

The Mammoth Site received a surprise recently when the new analysis for the new age of the Sinkhole was confirmed as being at least 140,000 years old. The Mammoth Site dates back to the Pleistocene (Ice Age) and so far all of the geochemical dating (such as radiocarbon dating) has indicated that the sinkhole was full of warm water and struggling mammoths about 26,000 years ago. Dr. Jim Mead, Chief Scientist of The Mammoth Site Science Team wanted to take a closer look at assessing the age and finding a more precise date – they wanted to try new technique.

Dr. Steve Holen, a Mammoth Site Science Associate collaborating with Dr. Shannon A. Mahan of the US Geological Survey in Denver have been using OSL (Optically Stimulated Luminescence) dating on some of Holen’s mammoth sites in Nebraska and around the region. So, on January 8, 2016, a group assembled at The Mammoth Site and took a number of samples of sediments to analyze for OSL dating. Samples were removed using several techniques such as chisel and hammer, electric saw, and core drilling. Background radiation was determined using a portable gamma spectrometer.

As Shannon tells us, in contrast to isotopic methods (such as radiocarbon dating; 14C), which uses a function of elemental decay or buildup, OSL dating measures the growth of natural environmental radiation that results in trapped electron charged signals within a mineral grain that are eliminated by exposure to light or intense heat. Basically, the longer a grain is buried from light, the more a signal is preserved on various grains of sediments.

Research continued as samples were taken from around Hot Springs and the Black Hills region to help with comparisons for the OSL testing. The analyses in the two labs takes a fair amount of time to make sure that the end results are accurate. The final results just became available.“We were pleasantly surprised!” said Dr. Mead, adding “We just knew that the age had to be more ancient than the 14C 26,000 years old, but the 140,000 is a nice shocker.”The researchers know that 140,000 years ago the climate of the Earth was heading into an extremely warm interglacial period –warmer than what we are in today. At this time South Dakota and elsewhere was coming out of a period of massive glaciers covering all of Canada and much of northern-most USA. Reported by the Mammoth Site in May, 2018.

READY TO PLAN YOUR TRIP?